Hello blog post readers! On this edition of my blog, I will be talking about the movie Casablanca (1942). I mentioned the film briefly in my last blog post, but will explain further about how this film portrayed Moroccans and Moroccan society.

This movie, directed by Michael Curtiz, is about an American expatriate, Rick Blaine who owns and runs a nightclub in Casablanca, Morocco in 1941. The nightclub is high-end, where many German and Vichy French officials frequent, as well as many refugees, since at this point in the war, America is not yet involved and people are desperately trying to get there. Rick’s Café Américain is an attraction for many different people in Casablanca. The drama begins when Rick’s former lover, Ilsa visits the club with her new husband (Viktor). They need letters that Rick has rumored to be entrusted with in order to escape to America.

While the plot is interesting, I am focusing more on how Moroccans are misrepresented in the film, and how Moroccan society was not portrayed justly in the film. There are a few factual errors in the film, but the biggest problem of all is how they treat Morocco. It is thought of as a ‘wild’ and ‘exotic’ to Americans, but the land that the film is based on serves more to further the plot than to educate or enlighten the audience about a culture different from their own. The main characters in the story are all white Americans. The only person ‘from’ Morocco of significance is Sam, the club’s pianist and Rick’s friend. Sam is played by a black, American man, Dooley Wilson.

Brian T. Edwards, in his book, Moroccan Bound: Disorienting America’s Maghreb, from Casablanca to the Marrakech Express,  says, “The complex yet readily apparent ways in which Casablanca brackets or suppresses concerns of gender and race … are a way of distracting viewers from a more potent possibility repressed by the film: that Sam … might enter into a conversation with the colonized Moroccan subjects who are relegated to the film’s background.” (Edwards, 67).

Edwards is talking about how in the film, Moroccans are used simply to further the plot, rather than complicate and nuance their experience in Morocco during WWII. The movie is much about refugees, (they even used actual refugees from Europe as extras!) but it is not the central focus of the film, it is background noise to what is going on with the main characters.  http://www.bbc.com/culture/story/20171124-why-casablanca-is-the-ultimate-film-about-refugees

Casablanca (1942), is a movie that uses the geography to further the plot points rather than explore the area, the people and the culture. They use Morocco as a vehicle to complicate and nuance the white, American characters.

Somewhat unrelated, but still of significance, especially to this time in Moroccan history, is how Vichy France had an influence over daily Moroccan life. Morocco was a protectorate of France.

The picture below is actually of a beverage company. The writing on the right is in Arabic and the picture on the left is in French, which I believe is indicative of Moroccan society, especially at the time this was taken in 1954. The company brew beers and malts and was founded in 1919. The photo was taken by André Menjoulet who was the director of this brewery at this time.  They have a mix of “modern” or Western, industrialization as seen with the factories and trucks, paired with more of Moroccans’ own culture. This picture reminded me of HST 122’s class where we talked about juju in Nigeria. We talked about how Nigerians used western technology to advance their own juju music. I see a similar theme with the Arabic writing next to the French writing and horses along with trucks. 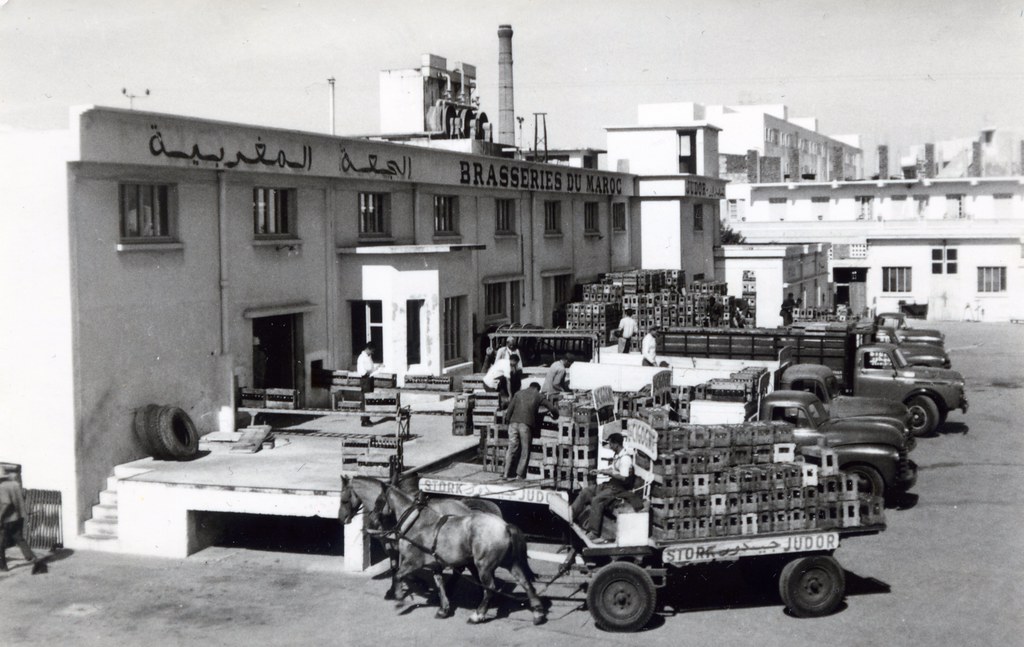